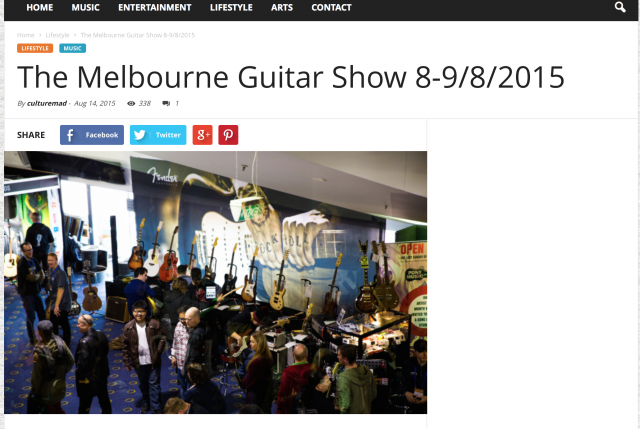 “GUITAR GEEKS UNITED, LETS ALL GATHER AROUND, THE MELBOURNE GUITAR SHOW IS ON AND THERE WILL BE PLENTY OF SOUND.”

This should have been the catch cry of the event.

As I walked through the gates of the Caulfield Racecourse where the Melbourne Guitar show was being presented, I wondered how much money would be lost, not on the horses, but on the purchasing of fine instruments like guitars, amplifiers, plectrums, effects and many other accessories. “Sorry Mr drummer, nothing here for you, so please move on”.

This was an amazing event, where you could walk pass any of the supplier stands and hear some snotty thirteen year old pick up a guitar and sound like a Jeff Beck or Jimi Hendrix. Ah the talent I’ve never had. Walk by the Sunburst Music stand and have a quick chat to Phil Cebrano, or watch the tuning of a Cole Clark guitar by Lloyd Spiegel. There were so many wonderfully displayed stands that dripped with musical tools that was just the envy of those wanna be rock stars.

The program was divided up into five sections. There was the main stage which hosted music sets by such amazing Australian talent, such as Rohan Stevenson, Shannon Bourne trio, King of The North, Nat Allison, Geoff Achison & Jimi Hocking, Jeff Lang and the incomparable Lloyd Spiegel, just to name a few.

Then there was the Acoustic stage, where some of the musicians with the likes of Ben Kelly, Nick Charles, Liv Cartledge and Fiona Boyes who all managed to strut their stuff on a stage that become very intimate for those who were fortunate to sit back and relax.

Two rooms were set aside for workshops that were driven by various sponsors at the show, such as the Yamaha / Vox guitar clinic featuring Jimi Hocking, who was explaining the wonderful sounds and techniques of using these instruments, or the Maton custom shop seminar, where one could learn about what goes into the making of a custom built Maton guitar.

The final section was devoted to what was called Professor Guitar & Professor Bass, where anyone who wanted to learn or even grab a few pointers and tips would find themselves at these clinics.

This was a two-day event, which brought together the masses, who came conquered and left, and like this Rock Photographer guy, whose dreams of being a Rock musician in his lunchtime, believed that during these hours, he became part of the Rock music family.

Bring on The Melbourne guitar show 2016.