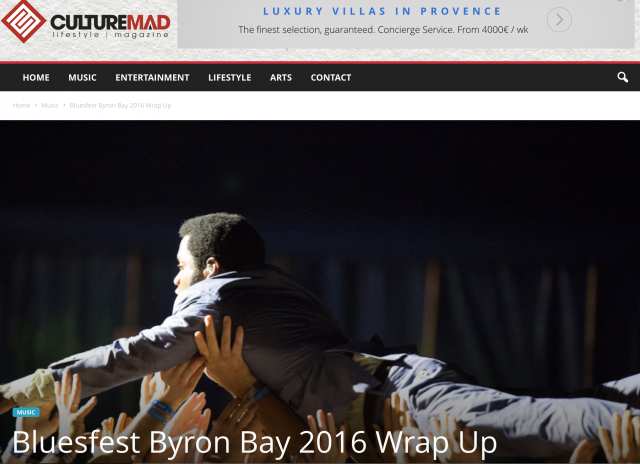 I forgot the undies.

I meant to bring a spare sexy pair to throw at Tom Jones. For heavens sake if I threw a pair of mine the poor guy would disappear under a cloud of sensible beige neck to knee cotton.

The Bluesfest lineup this year featured an incredible range of spectacular artists, the festival opening with the insanely popular Grammy Award winning rapper Kendrick Lamar whose frenetic high energy set saw girls fainting, fans climbing the support poles in the enormous Crossroads tent and the massive audience pulsating trancelike to his salty lyrics, right through to the evergreen sensational cross generationally appealing Tom Jones who closed the festival with effortless style and showmanship, his performance traversing multiple genres and decades, highlighting that justifiably famous honey dripping richly honed powerhouse of a voice that seems to flow from some place unaffected by time. Jones’ set featured bluesy numbers cheek to cheek with old favorites such as ‘The Green Grass of Home’, and ‘Delilah’, then sending everyone crazy with the raunchy ‘Sex Bomb’. Lovely Jan from Melbourne who was grooving along next to me, screeched into my ear at this point, ‘He can be my sex bomb anytime!’ Yes Jan, yours and ten thousand other screaming fans jamming the Mojo tent at Bluesfest’s Tyagarah Farm site just outside the gorgeous beach side haven of Byron Bay. I left Jan to try to get closer to the seventy-five year old Welsh grandfather with eyes the color of opalescent turquoise, but I wasn’t able to move far in the tightly packed crowd. The young woman next to me took my hands and invited me to dance with her. I asked her how she came to know all the lyrics of these songs, some of which are decades old.

She looked at me and smiled.

Highlights too many to mention but including the legendary Blind Boys Of Alabama, Jackson Browne, Mick Fleetwood Blues Band, Joe Bonamassa, Tedeschi Trucks Band and Australia’s Russell Morris whose set covered his more recent Blues journey but found itself deep in ‘The Real Thing’ and ‘Sweet Sweet Love’ before too long. The original Blues Brothers Band featuring Steve Cropper completed a set of mixed R and B numbers, the crowd shaking their tail feather to faves familiar from the movie soundtrack, such as ‘Minnie the Moocher’, ‘Sweet Home Chicago’ and ‘Gimme Good Loving’.

Graham Nash’s gentler elder statesman-like set attracted a mostly older crowd of devotees, who sang along to the master songwriter’s timeless ‘Our House’, which he prefaced with the story of the time when he was living in LA with the one and only Joni Mitchell who had just purchased a small vase whilst they were out. On their return home that grey cool day, Nash suggested, ‘I’ll light the fire, while you place the flowers in the vase…’ Yup, it just deepens the moment when you hear that tender, simple, beautiful little back story. Other special moments in the set were ‘Please come to Chicago’ and ‘Teach Your Children’ which brought tears to my eyes and those of others with me in the peaceful swaying crowd.

The National, Noel Gallagher, City and Colour, Kamasi Washington and D’angelo all drew huge crowds of devoted fans. Folks at Bluesfest are more than happy to share info about who they’ve seen and what not to miss, so I was super grateful to be given the heads-up about the talented son of Willie, Lukas Nelson whose crackling sets drew solid crowds in smaller venues, effortlessly crossing genres from original blues country to his cover of the Rolling Stone’s classic ‘Sympathy for the Devil’ which featured a gob smacking guitar solo played with his teeth.

The Wailers performed several full album sets but far and away their standout gig at this year’s festival featured the ‘Legend’ album covering songs such as ‘I’m gonna love you,’ ‘Buffalo Soldier’, ‘Jammin’ and ‘No Woman No Cry’ which all had the elated crowd singing and bopping along to every familiar word.

I only caught the last minutes of the phenomenally talented Irish Mythen, as is always the case with so many acts on at any given hour, you can’t make it to see everyone.

But those minutes have stayed with me. She stood centre stage and filled the space with only her profoundly bright voice reverberating in full flight, dedicating her song to Easter and her country of birth, Ireland.

The richness of the Bluesfest experience was deepened this year by the inclusion of the Boomerang Festival, ‘a safe, family friendly program of arts and age old culture and rituals,’ which hosted an impressive lineup of indigenous acts including Archie Roach, the Arakwal dancers, Young Environmentalist of the year 2015 Bundjalung woman Amelia Telford, Maori Te Kopere Healing, basket weaving and ‘making turtles’ workshops, children’s activities, talks and more. The refreshing change of pace, smaller crowds and variety of talented performers proved popular with family groups, the Boomerang stage enjoying a steady flow of visitors throughout the Easter weekend.

Passing the buskers stage I stopped a few times to sample some up and coming talent of a staggeringly high standard, including the fabulous Harry Nichols, whose original blues numbers drew an enthusiastic crowd. My guess is we’ll be hearing more from this young talent.

The much anticipated performance of Brian Wilson’s iconic 1967 album Pet Sounds saw the Mojo tent absolutely packed. After a slightly faltering start the all too familiar Beach Boys sound flowed, blasting an adoring crowd back down memory lane.

Talking to people throughout the festival, comments hailed Melissa Etheridge’s powerful set as one of the best this year. Popular hits of the gravelly voiced Canadian including ‘The Way I do,’ brought the house down, but often the lesser known acts in the more intimate venues such as Juke joint or Delta tent are where the unique Bluesfest memories are made. Fabulous Negrito inspired his audience to persevere through hard times as he has done, surviving a coma to evolve his own journey and produce his dynamic captivating set of catchy Delta Blues inspired pieces featuring slide guitar and piano.

If you’re not familiar with Bluesfest regulars Playing for Change, allow me to introduce you. The band is made up of musicians and singers from several countries including France, USA, Africa and Israel, performing lively catchy sets of reggae/soul inspired music to crowds of committed fans.

But there is much more to this story.

Playing For Change is a movement ‘created to inspire, connect and bring peace to the world through music.’ Established in 2007, PFC raises funds from annual membership fees and merchandise sales which is used to establish and support music schools and programs in underprivileged countries including Thailand, Nepal and Africa that are created and run by their local communities providing music education to hundreds of children.

Their key PFC message ‘PEACE THROUGH MUSIC says it all.

It must be said that the overseas headline acts draw massive crowds, but the loyal following for our homegrown talent is exceptional. Ash Grunwald, Hiatus Kaiyote, the Cat Empire, Emma Donovan and the Putbacks, Harts, Bluesfest regulars the brilliant Backsliders, Brotherhood of the Blues highlighting talented disabled musicians, and the dynamic Mojo Juju all received rave reviews from happy blues festers who’d been along to see them.

Chain packed out the smaller venues with fans who’ve been with them for decades, much like myself. I first saw Chain in the senior dining hall at my High School in the seventies. I thank and credit my school’s highly motivated SRC for bringing live music into my life as an impressionable teenager, the thrill of the bass guitar vibrating in my chest, the music washing over and around me, a joy that has never left me. I still feel the same excitement shiver through me as I did back at school when Phil Manning hits the riff in ‘Black and Blue’ and Matt Taylor’s blues harmonica kicks in. I had the chance to tell them when I met the guys backstage recently at the sensational up and coming Blues calendar event the ‘Mornington Peninsula Blues Sessions’ which has also recently hosted such exceptional talent as the inimitable Lloyd Speigel, Jeff Atchison, Fiona Boyes, Shannon Bourne and Ian Collard.

This year’s well organized and smoothly run Bluesfest hosted the usual festival food stalls and shopping opportunities including a well stocked merchandise and signing tent where you can meet your favourite artist and grab an autograph for your new album. The rain and mud are much discussed Bluesfest subjects, both under control this year with mostly blue skies and only one huge deluge over the five day Easter weekend event, seeing lots of regulars well prepared in their gum boots.

Whether you’ve had a one or a five day pass, you come away from this immensely entertaining experience with music soaked into you, songs and riffs playing in your head, from the favourites you couldn’t wait to see and the new artists you’ve just discovered.